I’m regularly asked to give my thoughts on cardiac conditions in athletes. The problem is that it is such a big and complicated topic with a lack of consensus amongst experts worldwide. I’ve decided to finally take on the challenge but I’ll do it in bite-sized portions. The first installment will be looking at cardiac screening for sport. I’ll try to keep in as simple and non-technical as possible but there are bits where medical-speak is unavoidable.

What we’re trying to prevent here is Sudden Cardiac Death (SCD) in exercise. There are many potential causes of SCD. In people under 35yrs it mostly occurs due to congenital and structural abnormalities. Most of these abnormalities are only diagnosed at autopsy. They include conditions like hypertrophic cardiomyopathy (HCM) and arythmogenic right ventricular cardiomyopathy (ARVC). In people over 35yrs, acquired conditions like ischaemic heart disease (IHD) (blockages of the arteries that supply the heart with blood) start to become more prevalent. In this article, I’ll be focusing mostly on screening the young and seemingly healthy sports participant for undiagnosed congenital disorders that can lead to unexpected SCD during sport.

Surely there’s no controversy about screening, right? If we can pick up cardiac conditions before they are catastrophic then we’ll save lives. But screening IS controversial and to understand why you must first understand what screening hopes to achieve. The WHO has some general screening guidelines;

The disease should pose a substantial risk

Screening must pick it up before it reaches a critical point

Screening must be minimally invasive or risky

There are few risks with standard cardiac tests

It must be affordable

There must be acceptable treatments that exist

The only treatment for most of these congenital abnormalities is to avoid sport and exercise. There is actually very little evidence to show that the risk of SCD significantly reduces in this way. Certainly, the risk of SCD DURING exercise diminishes. But we know that a sedentary lifestyle is a compounding risk for cardiac disease.

So firstly, how prevalent is SCD in athletes and who is most at risk?

A lot of our information on this comes from a big study conducted in Italy. Corrado et al conducted a 21-year prospective cohort study that involved 1.5 million subjects whose average age was 24yrs. They reported a 2.5x increased risk of SCD in athletes compared to non-athletes. After that, much of the medical world assumed that the incidence of SCD increased with sport. The problem is that the study was done in Italy and it seems that Italians have a much higher rate of both SCD and SCD due to ARVC than the rest of the world. In Italy the rate of SCD is 3.6/100,000 (mostly ARVC) which is 6x higher than the USA where it is 0.6/100,000 (and mostly HCM). In Denmark, they see a much LOWER rate of SCD in athletes (1.21) compared to non-athletes (3.76). If we look at the Danish data and assume that the asymptomatic congenital anomalies are equally prevalent in the athletic and non-athletic groups, it suggests that it is possible for an individual with an inherent risk to reduce (but not eliminate) their risk by exercising. More evidence of that is reported here.

So, if you’re born with a congenital heart condition you may be damned if you exercise and damned if you don’t. But the problem lies in the fact that if you die at home you’re considered unlucky. If you die while exercising it will be suggested that you shouldn’t have been exercising. Having young athletes collapse on a sporting field creates an enormous sh*t-storm of finger-pointing and is brand-damaging to sporting codes. Having young, sedentary people collapse and die at home unfortunately has far less repercussions in society.

So, what screening options do we have?

We’ve got a bunch of cheap tools that are less accurate. This includes taking a history about subtle symptoms and family history. We can perform a clinical examination. And we can do a standard 12-lead ECG.

Then we’ve got a bunch of expensive, more specialized and more accurate (but not perfect) tests. This includes things like an echocardiogram (ultrasound of the heart), a stress test, electrophysiological studies, 24-hour rhythm monitors and MRIs.

How effective are these options? 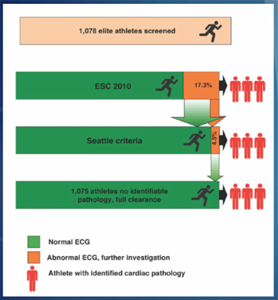 Initial tests: According to Wilson et al in 2008, combining history and examination alone is only 45% sensitive. If we combine history, examination and an ECG we achieve 91% sensitivity but, most importantly, we reach a Negative Predictive Value (NPV) of 99.8%. This means that anyone cleared by the screening process has only a 0.2% chance of a cardiac abnormality. The biggest problem with ECG if that there are still a lot of false positives, contributed to in part by the fact that there are adaptive (and harmless) changes that occurs in the hearts of well-conditioned athletes. We’re always trying to refine are ability to effectively screen benign and sinister ECG abnormalities. Traditionally we’ve used criteria set by the European Society of Cardiology (ESC) published in 2010. More recently, the Seattle Criteria appears to offer enhanced specificity without any loss of sensitivity. It’s beyond the scope of this article to detail the specific ECG criteria but more information on that can be found here.

Subsequent tests: So, after that process, anyone with a suspected abnormality gets referred for more comprehensive testing. When we’re looking for HCM (the most common cause of HCM in pretty much every country but Italy) we get an echocardiogram. But even that isn’t always straightforward. Athletes develop more heart muscle (thick ventricular walls) which makes their heart strong. HCM also causes thick ventricular walls but often also includes thickening of the septum (the wall between the two chambers) and can compromise the capacity of the chamber. A study published by Basavarajaiah et el in 2008 showed that it can be difficult to differentiate a normal athletic heart from HCM as both result in ventricular thickening and lower Left Ventricular ejection fractions. It gets more confusing when we discover that certain ethnicities have different ranges of normal. Black athletes have greater normative ventricular wall thickness. The most reliable way to differentiate a normal athletic heart from HCM is to see if the wall thickness reduces with de-training – a test that is unacceptable to many competitive athletes but is often used in recreational athletes.

Are new tests being developed?

As most of the conditions we are looking to screen for are genetically encoded, genetic testing is another possibility in the future. The problem is that there are multiple genoptypes (genes) that lead to the same abnormality and certain genotypes have variable expression which means having the gene doesn’t mean you necessarily develop the condition.

What about the 'cost' of screening?

The financial costs of screening is an important consideration (more on that below) but there are other costs. When your screening process has a 7% false positive rate, it means that for every life ‘saved’, 791 athletes would be disqualified from sport. The one life ‘saved’ may have only been saved from dying on the field only to have an increased risk of premature death elsewhere from their condition anyway. With what we understand about the positive effects of exercise on all aspects of health, the 791 athletes that have been unnecessarily disqualified from sport will pay an enormous cost. Put another way, although only 0.2% of the population have potentially lethal cardiac disease, 2% of the population will be excluded from sport. The benefit to that 0.2% is questionable but the detriment to the 1.8% is unarguable.

If we look at the cost of medical tests in Australia, it is estimated that cardiac screening for sport would result in an expenditure of $2.8 million for every life ‘saved’.

Has screening been shown to work in practice?

The Italians have the strictest screening criteria in the world and they’ve certainly demonstrated a reduction of SCD over time. There are a few issues though. They don’t have data from before screening commenced. As previously mentioned, they also have a population with an increased genetic predisposition to ARVC. In Israel (Steinvil et al) they have data on SCD from before and after strict screening measures were introduced in 1997 (a response to a vastly increased rate of SCD in 1995/6). The rate of SCD was 2.4 / 100,000 before 1997 and was 2.6 / 100,000 after 1997 (ie it actually increased despite significant financial costs and a number of athletes excluded from sport).

How do cultural differences play into it?

In the USA, they tend to be more concerned about the rights and freedoms of the individual. They generally require more conclusive evidence with no power to exclude athletes from sport. Their screening tends to deliver more false negatives. There have been cases in the US where doctors have been subjected to legal action for excluding athletes from sport because the athlete was not made aware of the potential repercussions of the test before it was ordered.

In Italy, the reverse is true. They tend to be more conservative. Most sporting organisations have the power to exclude athletes from sport and there are high rates of false positives. 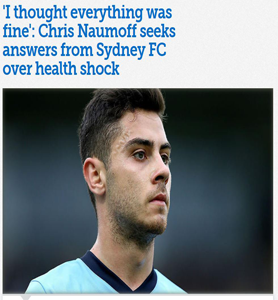 Chris Naumoff is a young soccer player (his story reported here) who made his debut for Sydney FC at age 18. Three years later he was signed by a Spanish club who performed cardiac screening, diagnosed him with HCM and advised him that not only wouldn't he be signed but that he was banned from soccer in Spain and advised against sports participation due to the risk of SCD. In our culture of blame it is hard to know where to point the finger: Does he blame his Australian club for negligence? Does he blame the Spanish club for hypervigilance? Does he blame the Spanish league for discrimination? Does he blame his parents for his genetic profile? It’s important to recognize that the diagnosis of HCM is not always clear-cut. IF he does truly have HCM, the risk of SCD is likely to exist for him whether he exercises or not. Sadly, from what I’ve read in the media, he has chosen to blame the Australians for not identifying his ‘risk’ earlier.

Based on the evidence presented above, it’s hard to be decisive. Screening appears to be effective at picking up people who have an increased risk but ineffective in ruling out those who don’t. Once we suspect there to be increased risk there is little evidence to suggest that quitting sport is going to be particularly helpful anyway. As a society, we tend to obsess about acute, catastrophic events. For example, we sensationalise rare events like shark attacks while thousands of people die quietly at home due to complications of a sedentary lifestyle. A death on a sporting field is far more dramatic to society that a death at home.

We can probably reduce the rate of deaths during sport but the cost is about $2.8million per prevention, 791 athletes subjected to a sedentary lifestyle per prevention and (in all likelihood) that death we’ve prevented still occurs prematurely but conveniently out of the public eye and not in front of a nation-wide television audience.

Personally I think screening with history, examination and ECG can be helpful but it should be done with full disclosure of it's shortcomings and athletes with positive results should have extensive counseling about what the results may or may not mean and, in most cases, they should NOT face a blanket exclusion from sporting bodies. Doctors should not be forced to perform screening out of fear of blame if the very rare and unpredictable worst-case scenario occurs.

Past and Present Affiliations